One of our favorite things about Sempervivum succulents is that they are always changing. Every time you look at them, there is something new happening. They grow larger. They change colors throughout the year. They shoot out baby plants. They send up a flower spike. It makes them very fascinating to grow.

On top of all this, sempervivum (as well as other succulents) also mutate. Mutations in succulents seem to be more common than in other plants. They have a crested form where the rosette does not grow from a single, center point. Instead of producing new growth at one point and pushing older growth outward, new growth is produced along a line. This is called cresting or the cristate form of the plant.

Sempervivum can crest when they are produced from the mother plant, or they can grow as a normal plant and then mutate later. Cristate plants do not pass on their mutation. Their offsets are usually normal rosettes.

Cristate sempervivum can create some bizarre shapes. The reason for these mutations is not known, but the crested form cannot be created artificially. Some varieties mutate more often than others, though.

The cristate form is just another reason that we love sempervivum. They are always entertaining with their yearly changes. Then, just when you think you've seen all they have to offer, they mutate into a weird, unique form that's completely new. 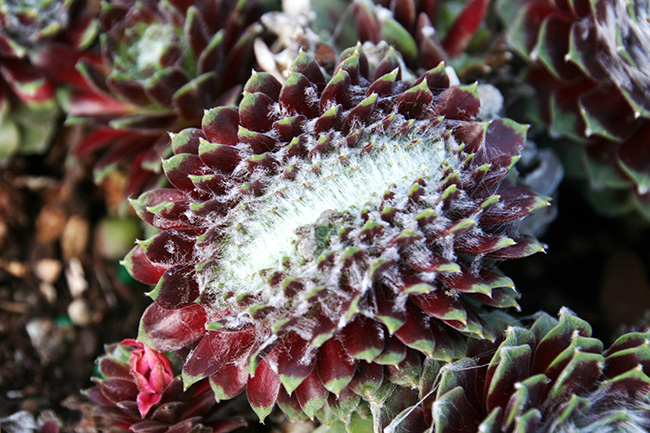